Hoberman Associates, in partnership with Innovative Designs and its parent company Barco, created the centerpiece for the U2 360 tour, the Expanding Video Screen. While large video screens are a familiar fixture for arena style rock concerts, U2 was looking for something unprecedented for its 360 tour; a giant screen that could change its size and shape.

Hoberman, along with U2’s creative team of Willie Williams and Mark Fisher, and Frederic Opsomer of Innovative Designs, collaborated to conceptualize this fusion of architecture, stage scenery and extreme technology. They came up with a design for an elliptical video display, approximately the size of a tennis court that could morph into a 7-story high cone-shaped structure, enveloping the band as it extends.

The screen is constructed of stainless steel and aircraft aluminum, the display is made of 888 LED screens, with 500,000 pixels spanning across them, providing concertgoers with clear and visually stunning images. It has a screen area of 3,800 square feet, and weighs approximately 120,000 pounds.

To create the Expanding Video Screen’s atypical design, Hoberman and its structural engineering partners, BuroHappold Engineering, had to overcome multiple technical challenges. These included: designing a structure that could withstand high winds and inclement weather, last the rigors of an 18-month tour, and be able to assemble in eight hours and disassemble in six hours for transport.

Photos and videos are courtesy of Mark Fisher and Barco. 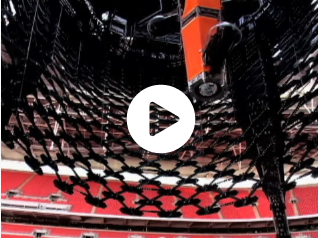 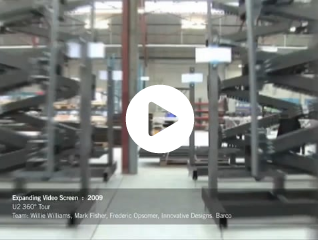